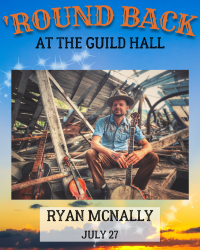 'Round Back - Ryan McNally

While he’s best known for his interpretative playing of traditional acoustic blues, jazz and old timemusic, audiences can’t help but notice the influence that Northern living has had on his music. For thepast 13 years McNally has called Whitehorse, YT his home.

Originally from rural southern Quebec, Ryan first discovered jazz and blues by uncovering a hugecollection of ‘78 records that belonged to his grandfather. Then, as a teen, his curiosity for the sound and history anchored his love for the genres and it’s only grown stronger since.His first album Down Home (2012), was recorded live by CBC North and received a feature on the popular radio show Saturday Night Blues, hosted by Holgar Peterson.

In 2017, his second album, Steppin’ Down Southwas nominated for Blues Artist Of The Year at theWestern Canadian Music Awards. That year Ryan also had the privilege and opportunity to perform for Prince William and Princess Kate during their visit to the Yukon.

McNally has become known for his diversity as a multi-instrumentalist. He plays guitar, harmonica, mandolin, violin and banjo, all in many different styles. Whether performing solo or with his band, his music is grounded in the legacy of the generations of players that came before him. All the while hecontinues to push the boundaries of his own signature sound.

Ryan McNally is performing as part of The Guild Hall’s ‘Round Back series, running July 6 to August 5. Doors at 7:30pm, Concert at 8pm. Cash Bar. For more information, please visit guildhall.ca

If you are sick or exhibiting any symptoms of COVID-19, please stay home. DO NOT attend the performance if you are ill. Please contact the Box Office at (867) 667-8574 or emailing boxoffice@yac.ca if you are unable to attend due to illness.