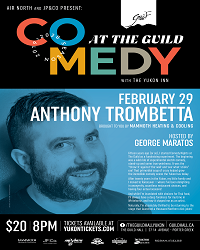 × ** If this show is listed as SOLD OUT, there are STILL TICKETS AVAILABLE AT THE DOOR **

Air North and JP&Co present Comedy at the Guild with the Yukon Inn. Anthony Trombetta brought to you by Elements Mammoth Heating and Cooling

Fifteen years ago (or so), Anthony started Comedy Nights at The Guild as a fundraising experiment. The beginning was a wild ride of experimental sketch comedy, stand-up and some true weirdness. It was the “throw-it-against-the-wall-and-see-what-sticks” era! That primordial soup of crazy helped grow the incredible comedy scene the Yukon has today.

After twenty years in the Yukon, he and his little family moved to Vancouver - where he’s been delighting in anonymity, countless restaurant choices, and having four actual seasons! And while he’s inundated with choices for Thai food, he will always have a deep fondness for his time in Whitehorse, and how it shaped him as an artist: “Naturally, I’m absolutely thrilled to be returning to the stage that launched a thousand Northern dick jokes!”