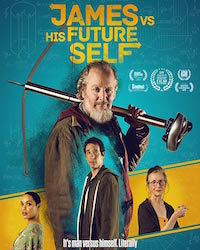 James vs. His Future Self

A scientist who invented time travel goes back in time to convince himself to never invent it in the first place. James is an uptight time-travelling obsessed young scientist, with a lifelong secret crush on his best friend Courtney, and a younger sister, Meredith, who is stuck looking after him since their parents died. James’s tunnel vision determination to become the world’s first time traveller has taken over every aspect of his life, and the only two people who care about him at all - Courtney and Meredith - are almost ready to give up on him. When James is visited by Jimmy (the excellent Daniel Stern), his nihilistic future self, he's told that he needs to give up his dream of becoming the world's first time traveller, or else suffer the unimaginably lonely consequences in this smart and grounded romantic comedy. -Calgary International Film Festival