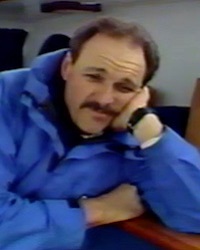 Assembled from videotapes shot in 1993 in downtown Vancouver, this found-footage diary film follows a man named Danny Ryder, diagnosed with leukemia, as he engages in a series of confessional monologues. Tender, frank, and intimate, he bravely faces his own mortality while reflecting on his life choices in this moving window into an existential inquisition. Cycling through moments of repose, regret, worry, humour, and hope, he fights both his disease and his formidable demons.

Co-directed by Lewis Bennett and Aaron Zeghers (the subject’s nephew), DANNY is at once a specific character portrait, an eerie time capsule of early 90s Vancouver, and something profoundly universal. In a noisy era wherein we perpetually broadcast our personal lives and curated personalities on social media, Danny’s private candour and internal reckoning feels especially meaningful. Set against the ghostly lo-fi backdrop of a city long since changed, DANNY is an invitation to contemplate life, death, our fears, and the ravages of time.

Preceded by Monolith Gabriel Bullen, 2019, Canada/Qatar, 3 min A nonlinear film examining U.S. artist Richard Serra's enigmatic installation, EAST-WEST/WEST-EAST, located deep in the desert of Qatar. The film was shot on one cartridge of Super 8 film, with all edits executed in-camera.