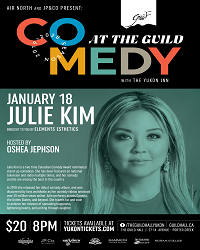 × Tickets available at the door!

Air North and JP&Co present Comedy at the Guild with the Yukon Inn. Julie Kim brought to you by Elements Esthetics

Julie Kim is a two time Canadian Comedy Award nominated stand-up comedian. She has been featured on national television and radio multiple times, and her comedy credits are among the best in the country.

In 2018 she released her debut comedy album, and was discovered by fans worldwide as her comedy videos amassed over 20 milllion views online. Julie performs across Canada, the Unites States, and beyond. She travels far and wide to achieve her mission of spreading happiness, lightening hearts, and uniting through laughter. https://www.juliekimcomedy.com/