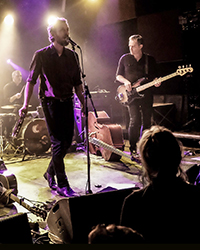 × Over seven albums in the last 15 years, multiple EPs, live broadcasts, and reissues, the Toronto-based project led by singer-songwriter Tony Dekker has established itself as a beloved indie folk act in their native Canada and beyond. The CBC has called them “a national treasure” while their music has taken them around the world, sharing a sound that is at once familiar and distinct, using the tools of folk music as the starting point to delve deeper.

Great Lake Swimmers have twice been nominated for Juno Awards, have been shortlisted for the prestigious Polaris Prize, and won a Canadian Indie Award for Favourite Folk/Roots Artist/Group. They have shared the stage as support for such musical luminaries as Robert Plant, Feist, and Calexico, and have appeared as headliners for many of Canada’s major Folk Music festivals. Their relentless touring schedule and countless live shows have helped them develop devoted fan bases across Canada, the US, Europe, the UK and many points beyond. Mojo dubbed them “Ambient Zen Americana” and Exclaim has described them as a “cherished blend of folk and orchestral indie pop.”