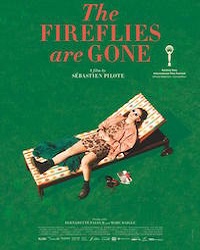 This screening is presented in partnership with Association franco-yukonnaise.

La disparition des lucioles brings to life the trials and triumphs of Léonie (Karelle Tremblay), a teenager waiting to finish high school and escape her industrial town. The story is anchored by the strong friendship between Léo and her much older guitar teacher, Steve (Pierre-Luc Brillant), which defies expectations as it touches on the characters' battling egos and negotiations of power.

While fantastical in spirit and carried by emotional music cues, Sébastien Pilote's film embraces a naturalism that showcases the social concerns of Quebec's Saguenay region. As clichéd as it may be to point out that there is universality to be found in the specific, Pilote's care in portraying Chicoutimi's main strip and mountainous suburbs enlivens Léo's mundane world to create a highly relatable sense of collective alienation. And yet, with its hazy, dreamlike feel and many nocturnal sequences, La disparition des lucioles is a film that also captures the otherworldliness of nighttime giving way to the dawn.