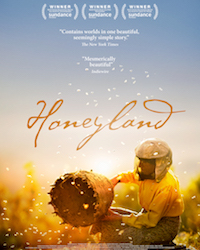 When a nomadic family move in and break Honeyland’s basic rule, the last female wild beekeeper in Europe must save the bees and restore natural balance."A triple Sundance award-winner, Honeyland offers up a visual feast and a poignant lesson in human misbehaviour. Haditze Muratova scales her way along the breathtaking Balkan mountainside to check her beloved cache of honeybees. She's the last of the Macedonian wild beekeepers and lives alone with her ailing mother on a farm unspoiled by electricity or running water. She survives by selling small-batch honey in a Skopje market, a mere four-hour walk away. Her peace is happily broken with the arrival of new neighbours, their herd of cattle and seven kids. She optimistically shares her one golden rule with the interlopers: take half the honey for yourself, but leave half for the bees. It doesn't take long for human nature to take its course, leaving the hive and Hatidze irrevocably changed. Sumptuously filmed over three years, this extraordinary debut fable imparts a timeworn message about humankind's true place in the natural order." Myrocia Watamaniuk, Hot Docs intl FF