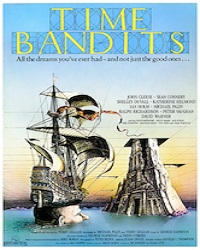 In this fantastic voyage through time and space from Terry Gilliam (Brazil, Monty Python, 12 Monkeys), a boy named Kevin (Craig Warnock) escapes his gadget-obsessed parents to join a band of time-traveling dwarfs. Armed with a map stolen from the Supreme Being (Ralph Richardson), they plunder treasure from Napoleon (Ian Holm) and Agamemnon (Sean Connery)--but the Evil Genius (David Warner) is watching their every move. Featuring a darkly playful script by Gilliam and his Monty Python cohort Michael Palin (who also appears in the film), TIME BANDITS is at once a giddy fairy tale, a revisionist history lesson, and a satire of technology gone awry.

CommonSense Media says: 9+ "Fun fantasy has a bit of bite."

Parents need to know that kids will see a good deal of cartoonish violence in Time Bandits (a man's arm is ripped off during an arm wrestling match, a hungry dwarf captures a rat and eats it, severed feet hang from the ceiling of an ogre's ship, etc.). Two characters are blown up at the end, but they aren't depicted as very nice people. Also there are scary creatures, and depictions of a supreme being and his nemesis that some will find objectionable. The bandits are pursued by the Supreme Being, i.e., God, who seems to have created the world in a slapdash manner. They also encounter the Evil Genius, or Devil. Throughout, the movie advocates reading and an appreciation for both the factual and mythological aspects of human history. Its dwarf protagonists also address themes of tolerance.