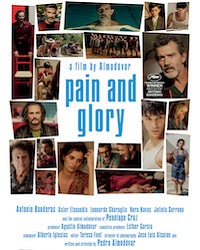 Rated R for language, recreational drug use and remembrance of debauches past. Be ready for full-frontal male nudity, passionate kissing, a mother's aging and death, and characters casually snorting, smoking, and discussing heroin.

A deeply personal work from one of the world's foremost filmmakers, Pain and Glory is pure Almodóvar: inventive and irreverent, poignant and exhilarating. Chronicling the existential odyssey of a filmmaker confronting the autumn of his life, the Spanish auteur's 21st feature immerses us in the thrall of memory (and the fleeting bliss of narcotics) while celebrating art as a balm for the burdens of mortality.

In Spanish with subtitlesThe film addresses mature topics like aging and death, drug addiction, and desire. And it returns to themes -- some auto-biographical -- that are present in many of his films, including dominant mother figures, Catholic schooling, Spain's urban/rural divide, the power of the movies, sexual identity, creative drive, and love.