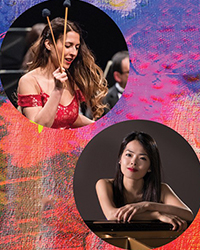 × Canadian marimbist Anne-Julie Caron sets herself apart on the world musical scene by her sensitivity, depth, and wide spectrum of tonal colors. For the Argentinean composer Guillo Espel, she is "one of my favorite marimbists in all the world." She won the 2007 Opus Prize as “Discovery of the Year”; the 2nd Prize at the 2006 International Marimba Competition in Linz, Austria; the 2005 Montreal Symphony Orchestra’s Standard Life Competition; and the 2004 Prix d’Europe. Anne-Julie Caron is a Pearl/Adams performing artist. www.annejuliecaron.com

Born in Japan, Akiko Tominaga began her studies at the age of 4, and made her solo debut in 1992, playing the Rachmaninoff Rhapsody on a Theme of Paganini. Since then she has performed a various venues and concert halls in the United States, Canada, Europe and Japan and her solo and chamber performances have been broadcasted on C.B.C. and Radio-Canada. She currently teaches at Mount Royal Conservatory in Calgary, where she is a faculty member of the Academy for the Gifted Youth Program.