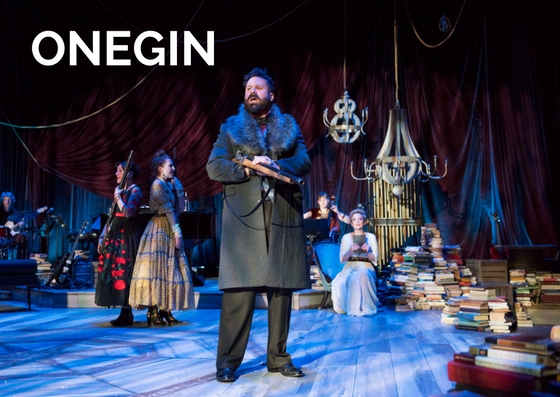 It’s Russia. It’s winter. It’s a long time ago… When Evgeni Onegin visits the Larin family home, his romantic charms stir passions long forgotten by its residents. Poet Vladimir Lensky’s romantic ideals are challenged (a duel!) after Onegin flirts with his fiancée Olga Larin, and even the sensible Tatyana Larin falls for the handsome rogue. The hit musical moves, shakes, and wakes audiences with its sweeping score, leaving the powerful question swirling in their minds: Look around, look around, look around, do you see someone worth dying for? Arts Club’s Onegin premiere was an unprecedented box office success–with a sold out 3.5 week run, including two holdovers that sold out within hours! A NOTE FROM THE CREATORS After Craigslist Cantata—a play about disconnection—we wanted to do something about connection, a story that could challenge our sometimes corseted Canadian sensibilities. Something where the audience could swoon and get swept away. Something full of grand gestures, dance, and light. Something honest but also modern. Because in the age of the cynic, where does the romantic fit? We adapted freely from Pushkin’s original poem and Tchaikovsky’s opera to give audiences the visceral experience of unrequited love. The characters’ missed opportunities show us what happens when we don’t embrace love when it comes. What it looks and feels like to turn away from its vitality and beauty. Ultimately, the show is our celebration of love. Our love of the theatre, our love for performing, our love for making things together, our love of the audience and your connection to what we create.