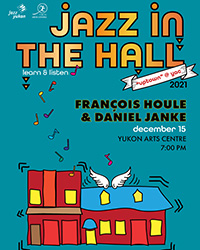 ‘listen’ – François Houle and Daniel Janke come together for a concert of new music. This exciting new collaboration between two accomplished creative music masters promises to surprise, seduce, and take the listener into uncharted stylistic territories.

François Houle is recognized internationally as a pioneer and leading innovator on the clarinet, pushing the boundaries of the instrument well beyond its usual confines. He has toured and collaborated with a veritable who’s who of the contemporary music scene, including the likes of Anthony Braxton, Evan Parker, Joëlle Léandre, Mats Gustaffson, Marilyn Crispell, Dave Douglas, to name a few. He has been nominated for West Coast Music Awards and Juno Awards on multiple occasions, and is a perennial selection on Downbeat Magazine’s Critics and Readers Polls.

Daniel Janke has composed music for NAC Touring Ensemble, Penderecki String Quartet, Standing Wave Ensemble, Toronto Symphony, Vancouver Symphony, NEM, and Bozzini String Quartet to name a few. He composed the score for Subconscious Password which was short-listed for an Oscar award [NFB, 2014]. Daniel is known as an innovator on prepared and improvised piano. His recording Celestial Blue with violinist Mark Fewer [2016, Centrediscs] was nominated for a Western Canada Music Award.

For the fall/winter Jazz in the Hall has moved “uptown” to the Yukon Arts Centre.

For 10 years, the Jazz in the Hall ‘learn, listen and jam’ series traditionally hosted at the Old Fire Hall in downtown Whitehorse and most recently ‘on the road’ in rural Yukon communities has presented a three part experience: an educational vignette, a featured performance by a Yukon jazz, blues or improvisational music ensemble and a jazz jam engaging players of all ages and instruments.

The educational vignette and recorded performances are subsequently produced as 30 and 60 minute episodes for download by anyone and programming by Yukon’s four community radio stations and national via the National Campus and Community Radio Association.

Presented by Jazz Yukon in association with the Yukon Arts Centre.

- Only 1 (one) ticket per household needs to be purchased to watch this online performance.

1. On the day/time of the performance, go to YukonTickets.com and Login

This is an ONLINE/STREAMING version of a live performance.