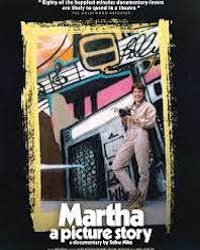 This lively doc profiles Martha Cooper (still going strong at 75), the photographer whose pictures of 1970s New York graffiti helped spread the art form across the globe. Valuable for its history as for its visuals; besides graffiti, it also shines a light on breakdancing and other hiphop arts.

In English, Portugese with English subtitles.

"Joyous… eighty of the happiest minutes documentary-lovers are likely to spend in a theater this year." - John DeFore, Hollywood Reporter

Showcasing one of Toronto’s best up and coming Hiphop dancing stars, “All It Gives” follows the story of Kosi Eze, a Nigerian immigrant who moved to Canada when she was 14. Her transition to the country brought immense culture shock, loneliness and loss of identity. She was immediately hooked by the vibrant HipHop scene in Toronto and Mississauga. Directed by Yukon-raised member of the Borealis Soul, Talia Woodland.
× Hold on