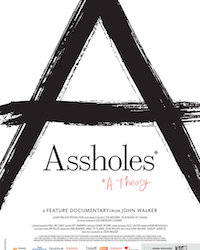 An entertaining, and timely, feature doc from acclaimed director John Walker (Passage, A Drummer’s Dream, Men of the Deeps) has been a festival hit in 2019. Inspired by Aaron James’ New York Times bestseller of the same name, Assholes investigates the breeding grounds of contemporary “asshole culture” and locates signs of civility in an otherwise rude-’n-nasty universe.

“Asked to explain how he documented the natural born sociopath or egotist in its native environment, Walker replied: “I had to look at breeding grounds for asshole behavior. I identified four breeding grounds in an American context: Wall Street, Washington, Hollywood, and Silicon Valley. Washington, I felt, was taking care of itself in terms of exposing its assholery 24 hours a day on the news. Wall Street is a bit of a cliché of assholery in the financial sector. Hollywood also takes care of itself in revealing its own assholery. In terms of asshole capitalism, I found Silicon Valley more interesting than Wall Street, because of its strong liberal starting baseline: ‘we’re creating a better world.’” One of Walker’s commentators in the film is the famous former Monty Python member John Cleese, who at one point says, “the greatest mistake was letting these nerds tell us how to live.” Although not all of the Silicon Valley “geniuses” are assholes, most are socially awkward with little sense of how the rest of the world lives. Their sense of aesthetics is neatly summed up in a sequence of drone shots created by Walker of the three headquarters for Facebook, Google and Apple. One looks exactly like the Pentagon. From above, they all resemble the sort of imposing fascist architecture that Albert Speer created for Hitler. The royalty of the Valley manifest a monumental sense of entitlement even in their buildings.” – Marc Glassman, POV Magazine
× Hold on