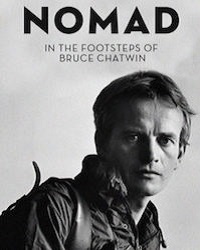 When British writer and adventurer Bruce Chatwin was dying of AIDS, he gave his friend Werner Herzog the rucksack that he carried on all of his adventures around the world. Now, three decades later, carrying the rucksack, Herzog sets out on his own journey inspired by Chatwin’s passion for the nomadic life. Along the way, Herzog discovers stories of dinosaurs, lost tribes, Aboriginal traditions, wanderers and dreamers. From Patagonia, to the gorgeous landscape of Wales, to the Australian outback, Nomad: In the Footsteps of Bruce Chatwin offers a fitting and thought-provoking tribute to a man whose work explores human restlessness and wandering, borders and exile, and art and objects. Told in Werner Herzog’s distinctive style, Nomad is a portrait of one of the 20th century’s most charismatic writers, full of memorable characters and encounters. It is also a portrait of two kindred spirits and offers a fascinating insight into Herzog’s own obsessions and imagination.