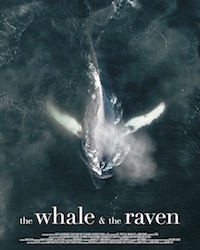 On the otherwise uninhabited Gil Island, just off the northwest coast of British Columbia, the sound of waves lapping and ravens cawing is punctuated by the haunting whale calls emanating from a network of loudspeakers. Drawn to the rich food sources and quiet waters, humpback whales, pods of orca, fin whales, and porpoises eat, play, and raise their young here, in the Kitimat fjord system.

Whale researchers Hermann Meuter and Janie Wray founded the Cetacea Lab on Gil Island at the invitation of the Gitga’at First Nation to study this unique marine environment. But the imminent construction of a new liquefied natural gas (LNG) exporting plant in the nearby community of Kitimat, BC, promises to bring increasing tanker traffic and noise, with unknown consequences.

Director Mirjam Leuze’s NFB co-produced documentary illuminates the many issues that have drawn whale researchers, the Gitga’at First Nation, and the Government of British Columbia into a complex conflict. As the people in the Great Bear Rainforest struggle to protect their territory against the pressure and promise of the gas industry, caught in between are the countless beings that call this place home.

Recommended for ages 10+
× Hold on